What is cruciate disease? 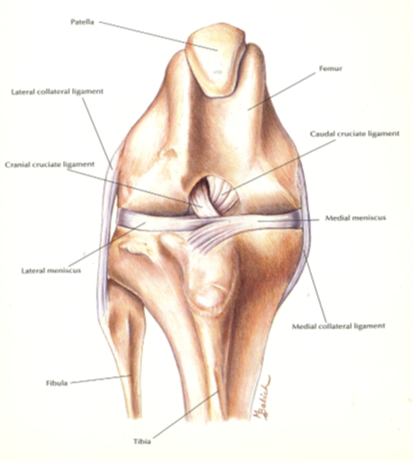 When the CCL is torn or ruptured, the tibia (shin bone) slides forward with respect to the femur (thigh bone). This is known as a positive drawer sign. Most dogs with this injury cannot walk normally and experience pain and stifle joint instability. Osteoarthritis can commonly lead to cruciate ligament injury or develop as a result of it.

What is a TPLO?

TPLO surgery has become the gold standard in terms of cruciate surgery. The technique was developed by Dr Barclay Slocum over 20 years ago and at the time was a radical departure from traditional cruciate ligament surgeries. The surgery has now proven itself to be an extremely effective long-term surgical treatment for this common injury, providing quicker recovery times, together with superior long-term limb function.

Surgical repair of the cruciate ligament is not possible. The principle behind TPLO surgery is that it completely changes the mechanics of the dog’s stifle joint so that the cruciate ligament is no longer required to provide stability to the stifle joint. Unlike the human knee, a dog’s stifle is always partially bent or flexed. This means that the CCL is constantly under load and has tension on it. It is this constant tension that makes this ligament so prone to injury.

After a dog has torn its CCL, when it bears weight on that joint the femur slides back on the plateau of the tibia. The resulting pain and inflammation, together with the joint instability mean that they will be reluctant to bear weight on that leg.

TPLO surgery involves a semi-circular saw cut in the top of the femur and the tibial plateau is rotated so that the femur can no longer slide back. This procedure eliminates the need for the CCL ligament and immediately returns stability to the stifle joint.

At Vet Marlborough, we use the OssAbility guided TPLO system, which uses a patented single use osteotomy guide. OssAbility is a veterinary medical device company dedicated to helping vets perform advanced orthopaedic surgery safely and accurately. The degree of rotation of the tibial plateau is calculated from X-rays taken prior to surgery. A computer-generated image accurately determines the size and position of the osteotomy guide, the rotation angle, plate size and position, making the procedure safer, more accurate, with a reduced risk of complications.

A sample pre-operative report is shown on the next page.

Post-op X-rays are used to check that the plate has been placed in the correct position, the screws are of the correct length and placed correctly, and the correction angle of the tibial plateau is as calculated and planned.

Following TPLO surgery dogs quickly begin weight bearing on the affected leg and most dogs walk out of the clinic at discharge two days after surgery on all four legs.

Are there alternatives to TPLO surgery?

The other techniques that we offer include MMP (Modified Maquet Procedure) and the traditional extracapsular lateral suture technique. MMP surgery uses a wedge-shaped implant of titanium OrthoFoam to advance the tibial tuberosity, redirecting the force generated by the quadriceps muscles to compensate for the failed cruciate ligament.

MMP surgery is quicker and less technically challenging than TLPO surgery, and hence is cheaper. It is suitable for small and medium dog breeds up to 30kg but has also been used successfully in large breeds. Visit www.orthomed.co.uk for further information.

The traditional extracapsular lateral suture technique has now largely been superseded, and we only use this technique now in very small dog breeds where there are financial constraints.

What do I need to know about recovery?

Regardless of the surgical technique used, the key to long-term success relies on the aftercare of your pet.

Muscles in the injured leg waste away very quickly following the injury through lack of use. A full recovery usually takes up to six months.

Comprehensive written post-op instructions are sent home at the time of discharge following surgery, together with a step-by-step guide to physical therapies and exercises that can be carried out at home to speed recovery, with regular check ups with your vet to monitor progress.

The first six weeks are the most critical, as the bone begins to heal. Confinement to a small area, such as a crate, is essential for the first six weeks after surgery. Short, controlled walks on a lead for toileting are allowed during the first two weeks, after which time they can be slowly increased, while following the programme of physio and rehab exercises. Your commitment to following the aftercare instructions will greatly influence both the speed of your pet’s recovery, and the success of the surgery.

What can go wrong?

Complications are uncommon but can occur with any surgical procedure.

The most common complication is post-op infection but can also include fracture, kneecap dislocation, injury to the meniscus (“cartilage”) after surgery and anaesthetic related problems.

If a complication occurs, your vet can usually resolve it. Occasionally a second surgery is required, but this is uncommon.

How can I help avoid the risk of complications?

There can be no unrestricted activity in the house or backyard and no jumping or play with other dogs during this period. Slippery flooring surfaces are to be avoided.

If your dog suddenly becomes lame during the recovery period, you should visit your vet, as this is not normal. 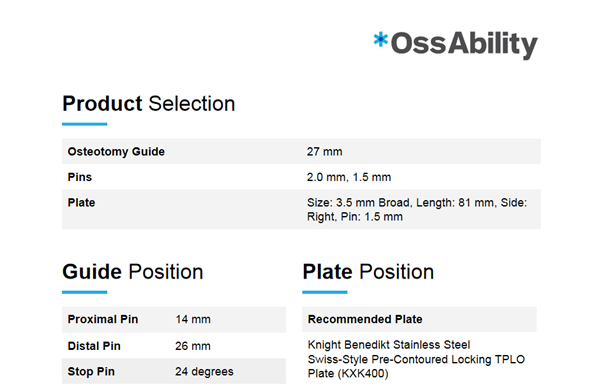 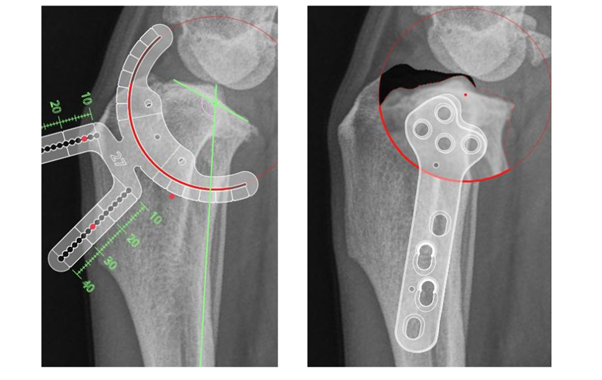